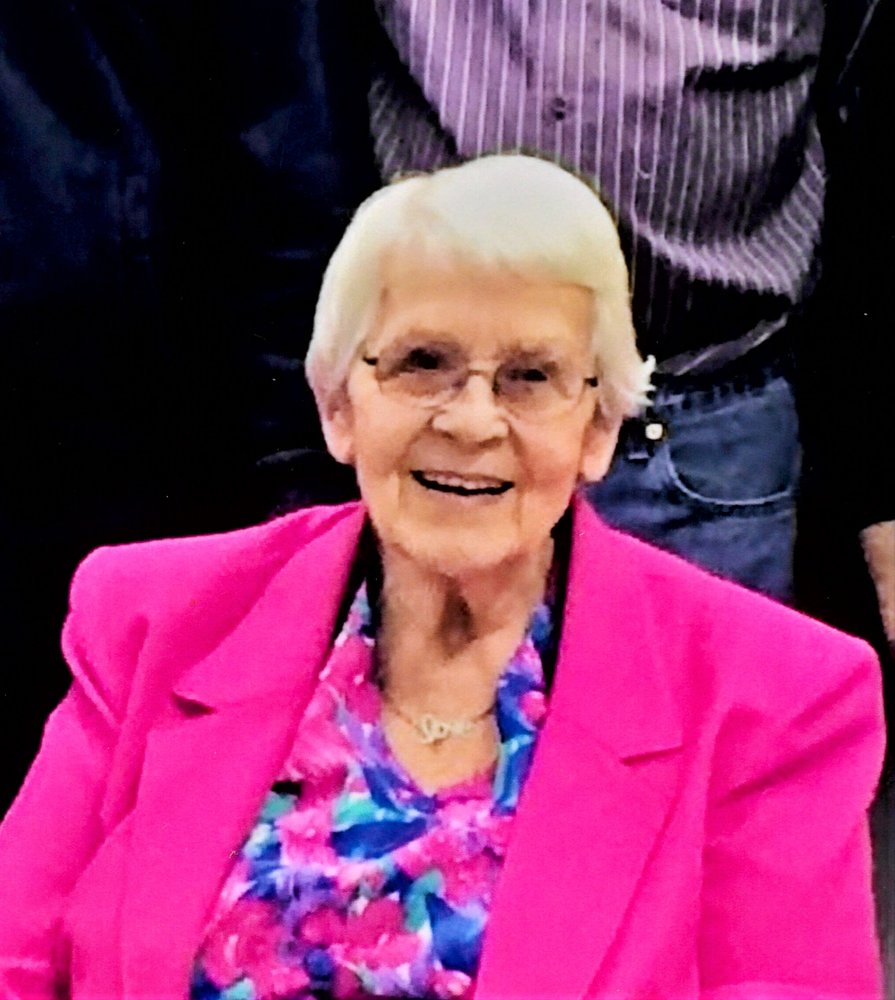 Margaret Elizabeth Rowe (nee Dornan), age 87, passed away peacefully on December 16, 2018 at the Red Deer Hospice surrounded by her family.  She was born on March 21, 1931 to her parents, Norman and Annie Dornan, on the homestead near Finnegan, Alberta.

Margaret is survived by her daughter Anne (Randy) Karren; sons: John Rowe, Len (Cheryl) Rowe and George (Julie) Rowe; four grandchildren: Trevor, Jeff, Koryn and Megan and two great grandchildren: Nathan and Owen; and three siblings: Doris Husty, Lawrence Dornan and Catherine Wiens. Margaret was predeceased by her husband Lorne in March 2018; a son, Richard in 2016 and her father, Norman in 1976 and her mother, Annie in 2009.

Being the oldest of four children and growing up in the 1930’s, Margaret learned at an early age to help out on the family farm with milking cows, cleaning the barn, shearing sheep, riding and breaking horses, haying and gardening. Margaret attended her elementary school years in Connersville School near her parent’s farm; completed her grade 9 in Brooks; grade 10 in Hanna while living in the Hanna Dormitory and grades 11 and 12 in Sunnynook where she met Lorne, who was also going to school there.  Margaret completed her teaching certificate from Calgary Normal School and began her teaching career at Cando, a one-room school near Big Stone.  Margaret and Lorne were married on July 4, 1953 on the Dornan farm and this past summer would have been their 65th Wedding Anniversary.  Lorne and Margaret lived on the Rowe farm near Stanmore for nearly 40 years.  After getting married, Margaret taught school at Westover, north of the Rowe farm and then Stanmore School until it closed in 1960. Margaret and Lorne raised their family on the farm and instilled the importance of farm values, also known as the Farmers Creed, in their children.  They also raised Hereford cattle of which they were very proud.  Besides helping Lorne on the farm, Margaret crocheted and knitted and took a keen interest in genealogy and history. This led Margaret to help out and become President of the history book club, which published the Prairie Rose Country.  Margaret also judged record books for the Youngstown 4-H Club for a number of years.   After moving to Hanna in 1990, Margaret volunteered by delivering Meals on Wheels, helping the Hanna Food Bank and then later becoming the President of the Hanna Food Bank. Margaret enjoyed visiting and playing cards with friends and family. She enjoyed many bus trips with Lorne to various parts of Canada and the USA in their retirement.  Margaret enjoyed her time living at the Hanna Manor and most recently the Hanna Lodge.

A Funeral Service will be held on Sat. Jan 5, 2019, 1:00 P.M., First United Church, Hanna, Alberta. Interment will take place at the Hanna Cemetery.

Share Your Memory of
Margaret
Upload Your Memory View All Memories
Be the first to upload a memory!
Share A Memory