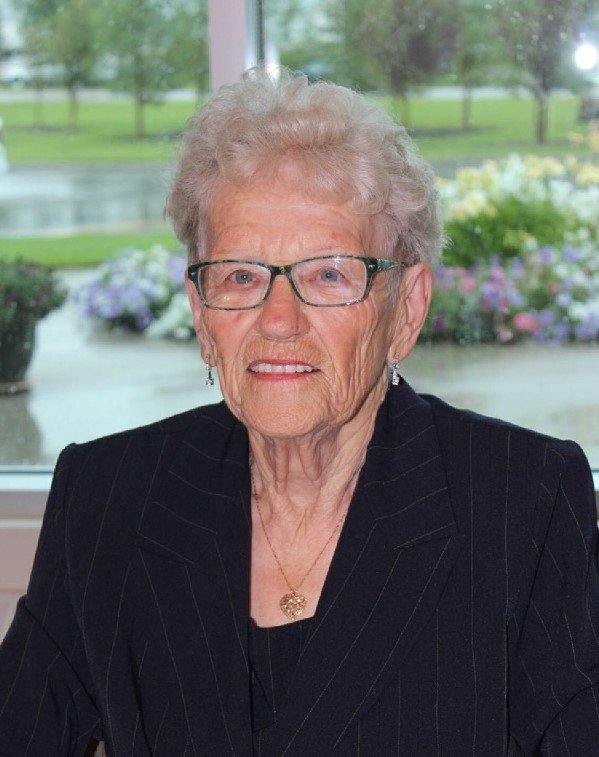 HAUGEN, Patricia (Pete) passed away peacefully September 16, 2018 at Hanna Long Term Care at age 90.  Pete was born in Hanna on August 28th, 1928 to parents Ivy and Pat Clark.  She was raised on a farm and went to school in Richdale with her five sisters, Margaret, Dot, Bun, Gene, and Verle.  Pete worked on the farm and at Clark’s General Store as it was family owned.  In July 1952 Pete married Jim Haugen and they raised their three children at the ranch east of Richdale. The family moved to Calgary in 1969, Pete and Jim also lived for a short time in Pincher Creek and Drumheller.  Pete worked as a homemaker, helped on the ranch as well as working at Douglas Drugs in Calgary for over 40 years. In Jim’s retirement he worked as a tour guide, so Pete spent many years travelling and helping him on his tours coming home with great memories and new friends.  She was a volunteer and loved being a caregiver, when she was helping others she was the most content.

Pete was predeceased by her husband, Jim, parents, Pat and Ivy; sisters: Margaret and Dot and numerous brothers-in-law, and other family members.

A Celebration of Life will be held for Pete on Saturday October 20th in the lower level of St. Magloire’s Anglican Church, 176-2 Street West, Drumheller, Alberta, at 1:00 p.m.

Share Your Memory of
“Pete” Patricia
Upload Your Memory View All Memories
Be the first to upload a memory!
Share A Memory