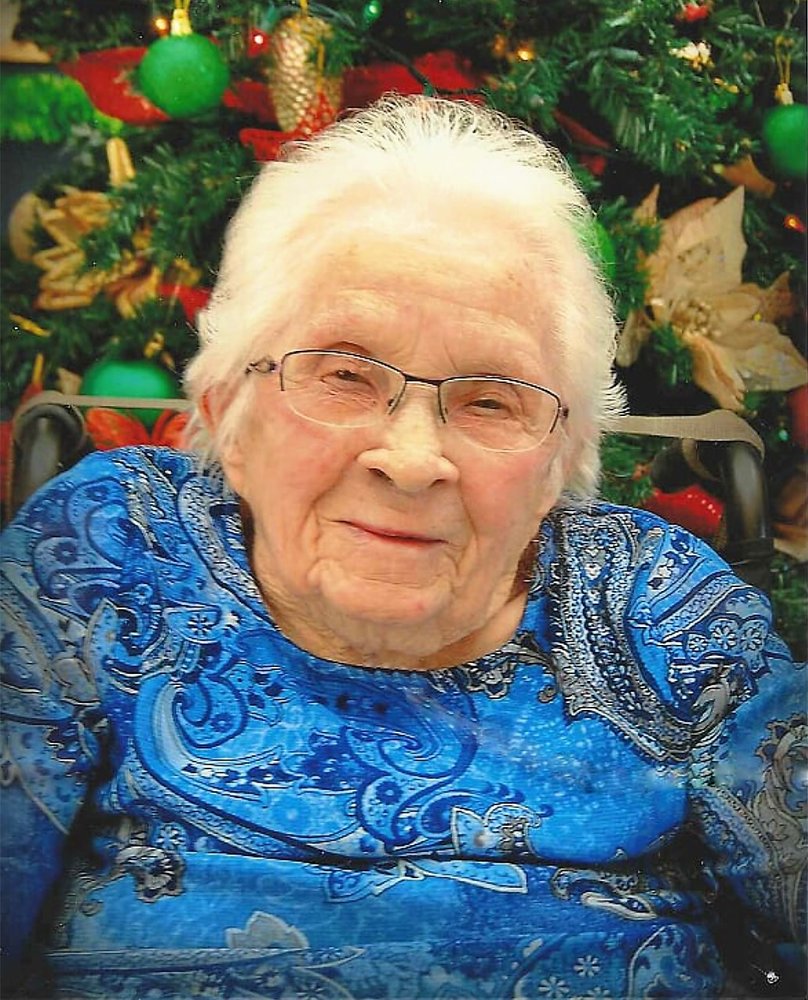 Janie Marjorie Nelson passed away August 6, 2018 at the age of 95 in Hanna, AB. Janie was born in Vanguard, SK on October 17, 1922, and was the eldest of three siblings:  Donald, Benjamin, and Ada. She played an active care-taking role in their early lives.  Janie married John (Jack) Sykes Nelson from Hallonquist, Sk., on December 23, 1942. She joined him on the Nelson family farm, later moving to ranch at Cadillac, Sk. while Jack worked there and at the PFRA community pasture.  During this time, they had two children, David, born March 24, 1946 and Hilda Mae, May 4, 1954.  In 1957, Janie and Jack purchased a ranch south of Youngstown. Their third child, Jerry, was born December 15, 1970.  Janie had many interests including quilting, knitting, gardening, raising chickens, getting a good deal at sales and visiting with dear neighbours and friends.  Many quilts and sweaters were gifts to family; and are still being used today.  Janie was an excellent cook, and in the early days of her marriage cooked for the threshing crews that came to harvest their crops. Later, she cooked for branding and weaning crews where meals were always well-received--honest, delicious fare. Janie was a true partner to Jack on the ranch, helping in any capacity that he needed.

Janie’s faith was clear and central to her days. She attempted to quietly live it out in all her dealings with others. In 2012, Janie and Jack moved to the Hanna Lodge where they resided until they transferred to extended care.  Janie was always interested in everything that her grandchildren were involved in and kept up with their lives. She joyed in their many successes and accomplishments.

Donations in Janie’s memory can be made directly to the Hanna Ladies Auxiliary, Box 23, Hanna, AB, T0J 1P0.

Share Your Memory of
Janie
Upload Your Memory View All Memories
Be the first to upload a memory!
Share A Memory