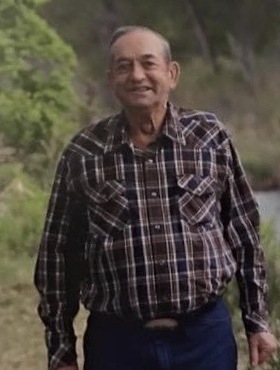 A memorial service will be held at a later date.

Please share a memory of Harvey to include in a keepsake book for family and friends.
View Tribute Book

Harvey Otto Stuber passed away peacefully at Seasons Retirement Community in High River, Alberta on Monday, November 21, 2022 at 84 years old. Harvey was a husband, father, son, brother, brother-in-law, neighbour, friend, rancher, and cowboy. He loved his family and friends; his passions were his ranch and animals.

Harvey was the first child born to Otto and Mary Stuber. He grew up and attended school in Medicine Hat, Alberta, where he learned to play hockey and apparently was the undisputed marble champion! e prHe moved to Hanna with his family in 1955. There, he attended church, where he met his future wife, Della. He and Della got to know each other when he was hired to work on Della’s parents’ farm southwest of Hanna. They were married on December 7, 1963.

Harvey and Della lived south of Hanna, where Dad worked as a hired hand until he and Mom bought his parents’ ranch southeast of Hanna in 1964. They remained on that ranch until retiring in 2006.

Harvey kept busy with his ranch and his family. He and Della parented their two daughters while running the ranch, which included all tasks and responsibilities associated with farming and ranching: sowing and harvesting crops; raising and training horses; raising and marketing cattle, pigs, and poultry; milking cows; and keeping dogs and cats. He was skillful and meticulous with his cattle and horses. One fond memory of Dad was after he had moved from independent living into the retirement home. He stayed with Janice on the farm for a few days and wanted to go out to the coulee on the side-by-side and check the cows. He was the first to notice a single cow was off by herself and sure enough, we investigated and discovered she had foot rot. Always a diligent rancher!

Dad and Mom taught us the ropes when it came to breaking and riding horses as well as checking, herding, sorting, and generally dealing with cattle and other farm animals. They spent years working hard on the ranch and attending auction markets to buy and sell cattle and horses. They travelled endlessly to haul us to rodeos, horse shows, BCRR (Big Country Riding and Roping Club) events, 4-H, music lessons, swimming, and figure skating lessons.

Dad was a detail guy. He worked together with Mom to ensure the ranch was tidy, the animals were cared for, and the fences were mended and painted. Perhaps his attention to detail was, in part, why he was the designated prairie oyster surgeon (a.k.a. castrator) at many community brandings.

Harvey was uncomplicated. He preferred to lead a quiet, simple life. If he wasn’t eating Alberta beef, his meal of choice was a bologna sandwich. He also loved “Christmas dinner with all the fixin’s”. He took time to think things through but once he made his decision, that was that. He was quietly wise and soft-spoken unless he was dealing with an unruly cow or an opponent who slashed him in a hockey game. He also did not like it much when the Flames lost. At one of the last Handhills Turkey Suppers he attended with Lorna, he remained silent throughout the meal until he finally said, “There are sure a lot of old people here,” to which Lorna immediately replied, “Have you looked in the mirror lately?” And then he laughed loudly.

Dad’s hearty guffaw was well known. He had a memorable and unmistakably dry sense of humour and was known to have a lot of fun with neighbours, friends, and family. There were team roping weekends, dancing up a storm at community dances and basement parties, card playing and all night canasta tournaments, old-timer hockey games, and occasional vacations to BC, California, Las Vegas, and Arizona when Mom could pry him off the ranch, which wasn’t often; he hated being away from home. When we were kids, we bought him a T-shirt that said, “I Hate Holidays”. Dad was the only person on the beach or 30 degree heat wearing jeans and cowboy boots! He loved playing as well as watching hockey and continued playing well into his forties. In his last game he was awarded a trophy for “Best Effort”.

Dad was a true cowboy to the end. When his dementia took over, his mind and body started to fail; doctors told him he needed to use an oxygen machine. He hated having the tubing poke into his nose, and staff at his residence told us that whenever they put the tubing into his nose and around his head, he would rip it off, twirl it around over his head, and then throw it across the room as if it were a lasso. He always greeted the staff with a “Howdy”, and after several months, one of the staff, a lovely woman from Eastern Europe, finally asked Lorna, “What does ‘howdy’ mean? You always say that to your dad when you come to visit, and he always says it to us when we come into his room. I don’t know this word.” Lorna told her, “It’s the way cowboys say hello.”

Harvey is predeceased by his wife of 47 years, Della, his father, Otto, and his mother, Mary. He is survived by daughters Janice and Lorna; sister Mable (Ben) Rath; brothers Roger (Sandra) Stuber and Gerry (Gail) Stuber; niece Marnie; nephews Darren (Pierrette) and Kent (Caterina); plus numerous aunts, uncles, cousins, and great-nieces and nephews.

A memorial and burial for Harvey will be held in the spring of 2023 in Hanna. Details will be forthcoming.

Hanna Funeral Services Ltd. has been entrusted with the care and arrangements. 403-854-5956.

Share Your Memory of
Harvey
Upload Your Memory View All Memories
Be the first to upload a memory!
Share A Memory