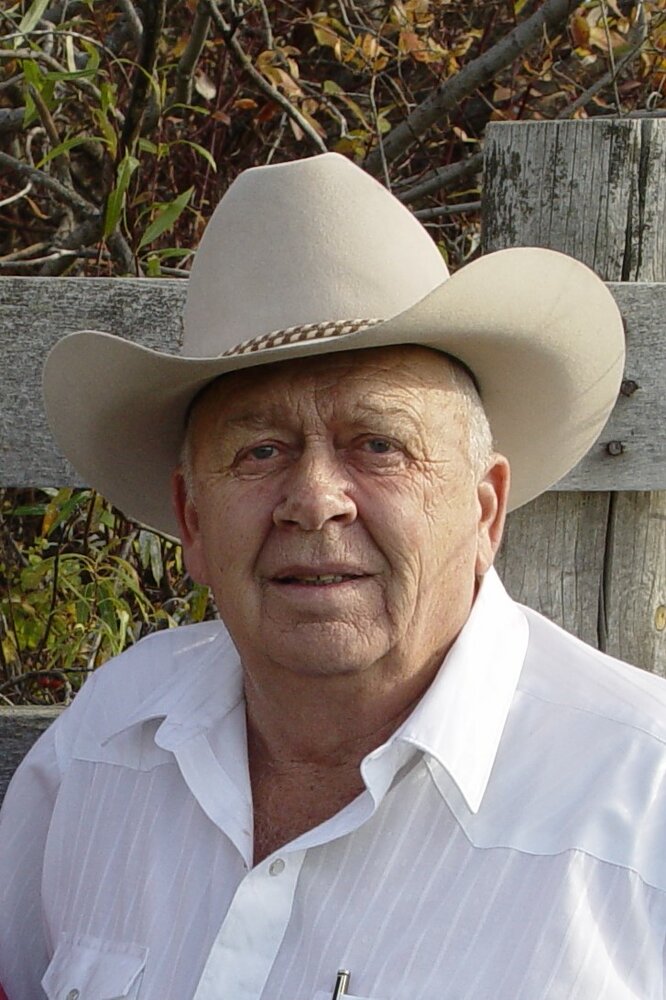 Ken passed away in the Hanna Hospital on July 30, 2022, at 86 years of age with his loving wife, Eleanor at his side.   Ken was a wonderful husband, dad, papa, brother, uncle, cousin, friend and neighbour who will be deeply missed by all that had the opportunity to share his life.

Ken was born in the Hanna Hospital on August 22, 1935 and lived his entire life at Endiang.  Ken attended Summerhill School ending his formal education in Grade 8, and he then assisted his dad with the farm and continued actively farming until 2001.   Ken married the love of his life, Eleanor Tucker, on November 24, 1956, and they have two daughters – Val (1961) and Kris (1966).  They started their married life south of Endiang on the Dick Boehlke farm, which was Eleanor’s grandfather’s homestead, prior to building and moving to their own home in 1964, which is still the family home today.

Ken was very active in the community starting from a young age through until this spring.  He played with the Endiang Men’s Blue Jays hardball team and in later years helped to coach and manage.  As he grew older, floor curling became his passion, and he organized many local bonspiels and traveled to various communities to compete. He held leadership roles on the Paintearth Gas Co-op, SLW Ag Society, Endiang History Book Committee, Endmoor Culture & Recreation Committee, Boehlke Fish Pond Committee, Endiang Koolers and Endiang Cemetery Club. He was involved with the Endiang Community Hall over the years, helping construct the photo frames, hosting annual Turkey Suppers, and assisting with Homecoming Celebrations in 1975 and 2000 as well as the Centennial Celebration in 2010.   The community recognized all the volunteering and accomplishments by presenting Ken & Eleanor with the Stettler Dodge Community Service Award in 2018.

Ken cared deeply for his community and wanted to have a connection with all who lived in it, and so he decided to host a pancake breakfast at the farm for all his family, friends and neighbours.  The event was a success and grew into a full weekend of activities, frisbee golf, fireworks, campfire sing alongs, games and of course camping.  This July, the family hosted the 40th Annual Pancake Breakfast & Campout, we were blessed to have Ken join us for a few hours on Sunday.

Ken lived an extraordinary active and healthy life until this past winter, when his body stated to fail him and at the end of May he entered the hospital where he stayed until his passing.  The family wishes to thank the Dr. Wendy Fortna and all of the staff at the Hanna Hospital for the exceptional care provided to Ken over the past few months.

Ken leaves to mourn his wife of 65 years, Eleanor, his daughters Val Schultz and Kris (David) Mohl, his special daughter Judy Crawford, his grandchildren Michele (Shane) Toews, Kyle (Rachel) Mohl and Jeff Crawford, his sister Jacky (John) Chop, his sister-in-law Mickey Tucker, and his nephews - Greg Chop, and Dale (Florence), Glen (Theresa) and Lee (Christine) Tucker and their families, as well as several cousins and too many friends to count.  He was predeceased by his parents Jack and Florence Schultz, his in-laws Ralph and Tillie Tucker, his brother-in-law Clifton Tucker, and his niece Rhonda Sedgewick.

In lieu of flowers and if desired, donations in Ken's memory can go to the Endiang Cemetery Box 321, Endiang, AB T0J 1G0, Ladies Auxililary Box 23, Hanna, AB T0J 1P0, or charity of your choice.

Share Your Memory of
Kenneth (Ken)
Upload Your Memory View All Memories
Be the first to upload a memory!
Share A Memory