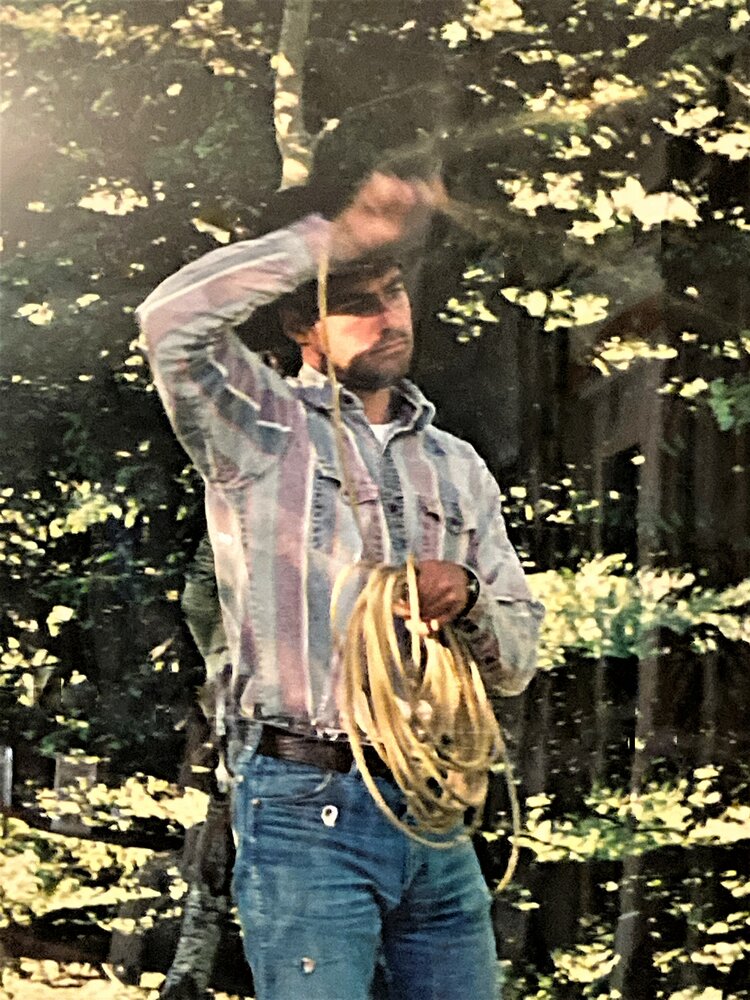 John William Kirk Verbeek passed away suddenly on April 11, 2022, at the young age of 54. John was born on February 25, 1968, in Sudbury, Ontario to Vera and John Verbeek, and sister Debby Verbeek.

John was known by many nicknames over the years…Pokey, Squirt, Dirt, Dirty Dirt, Newt, Dad, Papa, Electric Man and to a few…. Uhgugugua!

Although John was born in Ontario, his heart was in the west.

John was an extreme sport enthusiast before it was popular. He enjoyed extreme sports and jumped in with his whole heart. Motorbike racing, dog sledding, kickboxing, boxing, and wild horse racing. Fishing and Deep-Sea Fishing were close to his heart as well. For a charity fundraiser, John wrestled a bear!

In high school he played football, not only because it was rough, but also, because he was fast. John had no problem getting knocked down. It was getting up and colliding with others that made him smile.

He was introduced to his first organized extreme sport at a young age which was dog sledding. He loved animals and animals gravitated to him; he had a rapport with them.

John took part in many races across Ontario, Quebec, Labrador and the Northeastern United States, usually ending up in the top three spots. He trained a team of dogs for the Iditarod in Alaska. John endured snow blindness, frostbite to his face, and several broken bones in his years of participating in extreme sports.

John believed from a young age that those individuals that could not speak for themselves needed to be protected. John became a member Canadian Armed Forces in his late teens where he learned a sense of duty, loyalty, integrity and courage. John embraced the challenges and experiences.

His boxing and kick-boxing experiences allowed him to hone his speed, agility, balance, coordination and reaction times, which undeniably were an advantage when working cattle and wild-horse-racing.

John arrived in Alberta in the ‘90’s. He treasured the western lifestyle and the unwritten code. His first experience in Alberta was at Homeplace Ranch in Priddis working for Mac Makenny.  Mac was a great influence in John’s life.  He observed Mac and learned from him. John always had great things to say about his involvement and teachings while there. It was Alberta that John found his chosen way of life.

John settled in Youngstown and was married. He provided for his family by working for local ranchers, performed custom fencing and working in the oilfield.

John certainly enjoyed working with cattle. Regardless of the weather, if you called, John would be there to help. He often didn’t have much to say, as he would prefer to listen and observe. If asked, he would offer his opinion.

Wildhorse racing became part of John’s life which allowed him to encounter new people and gain new experiences and make new friends. Beyond the initial years, he introduced his children John Jr and Wyatt to the sport. John fulfilled the duties of president of the Wild Horseracing Association for a term.

He enjoyed being a dad, teacher, friend, and mentor.  He shared his love of animals, extreme sports, fishing and travelling with them. Seeing them attain milestones put a smile on his face and joy in his heart. He and his three boys enjoyed playing and working together.

One of John’s pleasures was preparing meals for friends and family. Whether it was breakfast on weekends, or creating special meals. He also appreciated the effort people went to when having a meal prepared for him.

John was a good brother. Although he was younger, he was Debby's protector. John will be missed by all his family.

John will be remembered for living hard, playing hard and loving hard.

John is predeceased by his paternal and maternal grandparents: John and Theresia Verbeek (nee Bouvier) and Melvin and Irene Howie (nee Betteridge).

John’s family would like to take this opportunity to thank the friends and community members that helped make John’s time in the Village of Youngstown more comfortable and accessible. An extra special thank-you to Ken and Marilyn Johnson, Bruce Fildey, Bill and Nick Armstrong (Bill’s Building), Mervin Laughlin, Jason Fildey, Conrad Ritz, and Merlin Moggridge for everything you did for John and his family.

In lieu of flowers, donations in memory of John can be made directly to the Youngstown Fire Department, STARS Air Ambulance, or to the Hanna Food Bank.