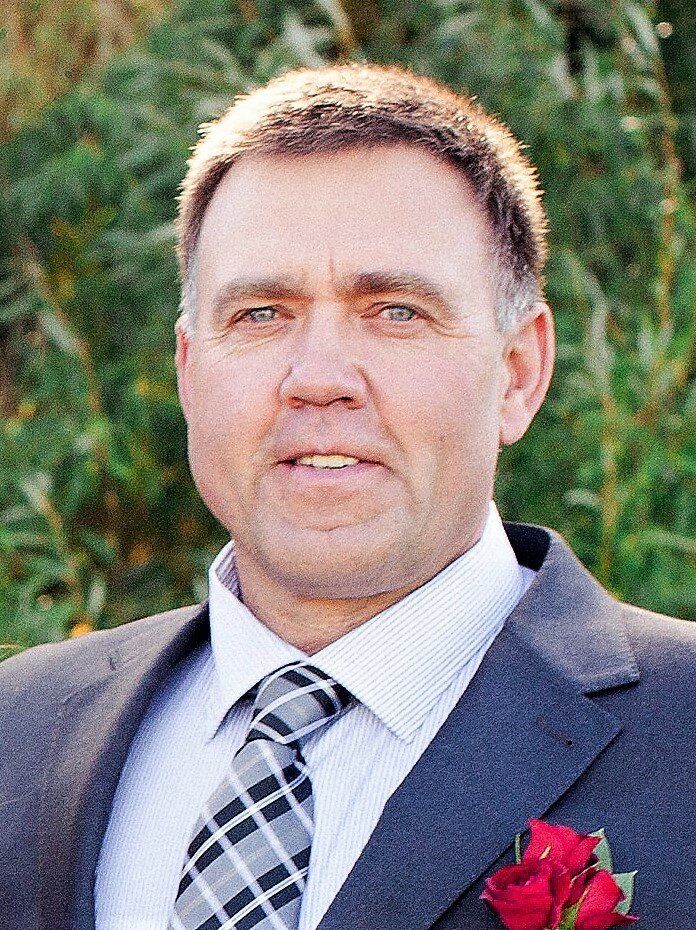 A service date will be determined.

Quinn Gordon Templar, beloved husband, son, father, grandpa, brother, uncle and friend passed away at the age of 59. Quinn passed away at the Red Deer Regional Hospital surrounded by his loving wife, his daughters, and sons-in-law, after a five-and-a-half-year battle with cancer.

Quinn was born June 30th, 1962, at the Hanna hospital to Don and Norma Templar. Quinn along with his three siblings, Chris, Sherry, and Warren, grew up on the family farm in the Sheerness area. As a child Quinn was described by his mom and siblings as happy and helpful, always willing to lend a hand and protective of those he loved. Unanimously, they all remember Quinn as a jokester, which most people who knew him probably would too.

In 1979 Quinn met the love of his life Laurie Windsor, he knew very quickly that she was the one he wanted to marry. Their wedding took place November 14th, 1981. Quinn was a caring and loving husband, always putting his wife and kids first. Quinn and Laurie were married 40 amazing years.

August 1987, Quinn and Laurie welcomed their first daughter, Lindsay, to the world, and nearly three years later their second daughter Jade was born. Quinn was a devoted father to his girls, taking them for quad rides, pulling them around on the sleds with the snowmobile, building snow hills for them to play on, and he would take them out in his old truck letting them drive in the field. He would take the family camping, trips to B.C., and go on random road trips out in the country. He never missed a dance recital or any important event of Lindsay and Jades. He would do anything for them, he was always there when it counted.

The only thing Quinn cherished more than being a dad, was being a grandpa. He was always eager to spend time with Rayna, Holly, Isla and Vayda. He would get down on the floor to play with them, read books, and snuggle with them any chance he could.

He started his career early working for his dad at C&D Oilfield Construction Ltd. Quinn loved his work, he was always looking to expand his abilities and skills which led him to form Quinn's Big Country Oilfield Services in 1995. The people he had the opportunity to work over the years played a huge part in why he enjoyed his job so much.

Aside from family and work, Quinn had many hobbies and interests that filled his heart and time with joy. He enjoyed hunting, fishing, quad trips, snowmobiling, a good storm and going to the car shows. He was proud of his 1966 GMC and working on the 1941 Fargo. You would often find him browsing antique shops or going for drives. He was always puttering around his shop for hours on end, if he wasn't busy working on something he was having coffee with his friends there. He valued the friendships he made from all walks of life. Quinn had a fondness for animals, but one special dog always had a place in his heart, and that was his furry friend Buffy.

Quinn was predeceased by his beloved father Don Templar.

A private family service will be held on April 7, 2022, 1pm. A video recording of Quinn’s service will be made available to the public on the Hanna Funeral Services website.

In lieu of flowers donations can be made directly to the Central Alberta Cancer Centre, 3942 50a Ave, Red Deer, AB T4N 6R2.

Hanna Funeral Services Ltd. has been entrusted with the care and arrangements.

Share Your Memory of
Quinn
Upload Your Memory View All Memories
Be the first to upload a memory!
Share A Memory