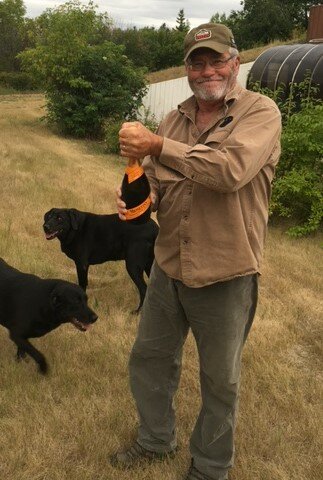 Frederick Brett Setter, beloved husband and best friend of Karin Setter, passed away on January 6, 2022, at the age of 67.

Brett was born July 3, 1954, in Drumheller, Alberta, the second oldest of seven children. Brett was raised in Calgary at the Currie Barracks military base where he enjoyed skating, camping, fishing, and hunting with his siblings and family.

At the age of 17, he joined the Royal Canadian Airforce as a radar technician before going to SAIT and getting his welding ticket. In 1982 Brett started what would become a life long career in the oil and gas industry working both internationally and domestically.

Brett had a love for fishing, camping and of course bird hunting, often driving through his beloved prairies with his wife Karin and dogs. Later in life, Brett and Karin got their dream of owning a property in the country where his entire family enjoyed smoked food and campfires at the bunker. In addition to the love for his wife, Brett had an immense love for his family ensuring many
lasting memories were made.

Brett will also be missed by his sisters Holly and Heather, brothers Chad and Clayton, as well as a wide circle of friends. Brett was predeceased by his mother Anita Joyce and father Frederick Earl, and two brothers Calvin and Todd.

A celebration of life will be held at the Hanna Community Hall at 503 5th Avenue W on January 15th, 2022, from 1-3pm. Please note Covid-19 restrictions are in place. In lieu of flowers please consider a donation to The Mental Health Foundation in Alberta at mentalhealthfoundation.ca or to the Hanna SPCA.