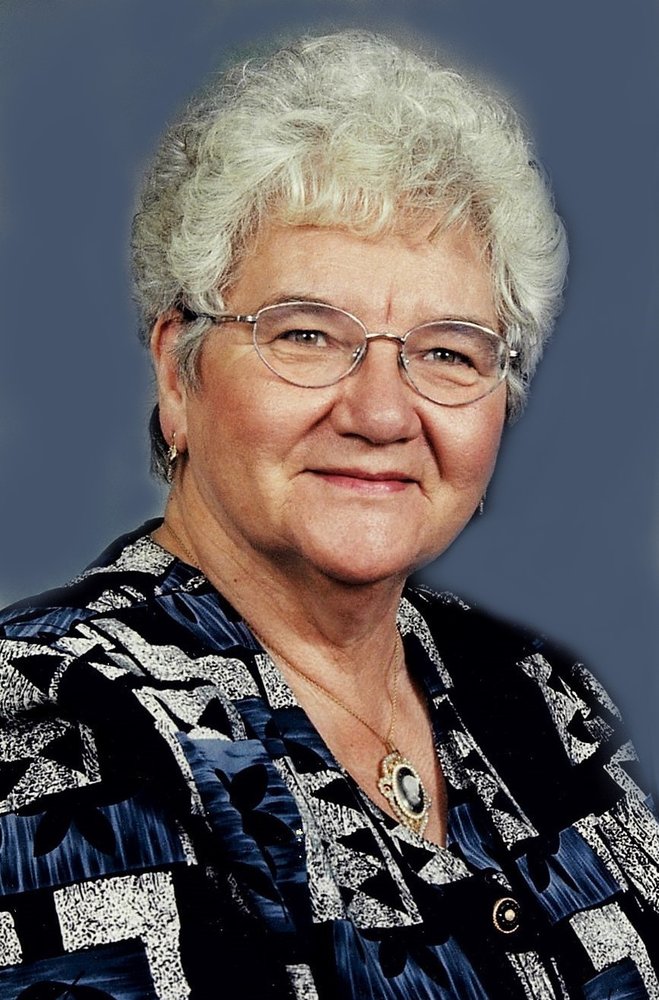 Darlene was born on January 31, 1940, in Redcliff Alberta, passed away April 27, 2021, in Hanna Alberta, at the age of 81 years.She was born into the world premature and only three pounds, Darlene was a fighter for life. She grew up in a small town where not only parents were a part of raising her, but the community helped shape her outlook on life. The Levenne children had neighbours that kept a close eye on them. Darlene had a lot of respect for these people, and this influenced how she looked out for family, friends, and neighbours.

She came to the Youngstown area with her son Les Johnson in answer to an ad in the Western Producer for a housekeeper from Charles Rosenau in 1965. In December of 1969 Charles married Darlene.

Darlene loved her family and tried to stay in touch with her siblings and families; Christmas cards and visits were especially important to her. As time went on, she was able to make herself more at home with neighbours and Charles’ family. Knowing what it was like to come into a new community, she would help and be friends with anyone new.

There came a point that both Charles and Darlene gave their lives to God through the salvation of their Lord Jesus Christ. They attended the Gospel Chapel of Youngstown where their circle of friends grew larger.

Darlene had a very compassionate heart and if anyone were hurt, mentally or physically, had a loss, or in the hospital, Darlene would always have food, a visit, or a card fit for the occasion. She empathized with people in all circumstances, whether a birthday, wedding, a funeral or just life.

Music was a big part of Darlene’s life. From dance music/polkas when she was young, to Country and Western to fill an empty house, and hymns and spirituals. She appreciated specials that would be sung at the chapel and especially loved watching and listening to the Gaither Vocal Group. She passed away while the hymn “Softly and Tenderly” was playing beside her.

When Darlene moved to the farm, she lived it to the fullest. She rode a horse (though not her favorite thing to do), milked a cow and helped Charles with feeding and caring for the cattle. She also cultivated, combined, drove a grain truck, and more, whenever called to do so. She especially adored cats, and for a time part of her world revolved around her house cats.

Before lack of dexterity and poor eyesight, she crocheted many articles of clothing for newborns, doilies for wedding gifts, and articles to give away. Her focus changed to sewing quilts for a time, and giving those away, her gracious and giving heart was felt by many.   Darlene was an exceptionally good cook and capable of making meals for crowds of people at brandings and weanings.  Guests would also appreciate her Sunday dinners. Being a farm wife, she so much appreciated helping out and catching up with fellow neighbour wives when they had to prepare their branding and weaning meals too. When grandchildren came into her life, she was overjoyed. She enjoyed the time she spent with them and was very proud of their accomplishments.

As she and Charles began to deal with age-related issues, they moved from the farm to the Seniors Lodge in Hanna. They moved in June 1st of 2014 and she resided there until April 11, 2021. She greatly appreciated the homecare and staff that took care of her at the lodge.

If desired donations in memory of Darlene can be made directly to the Hanna Ladies Auxiliary, Box 23, Hanna, AB, T0J 1P0.

Share Your Memory of
Darlene
Upload Your Memory View All Memories
Be the first to upload a memory!
Share A Memory