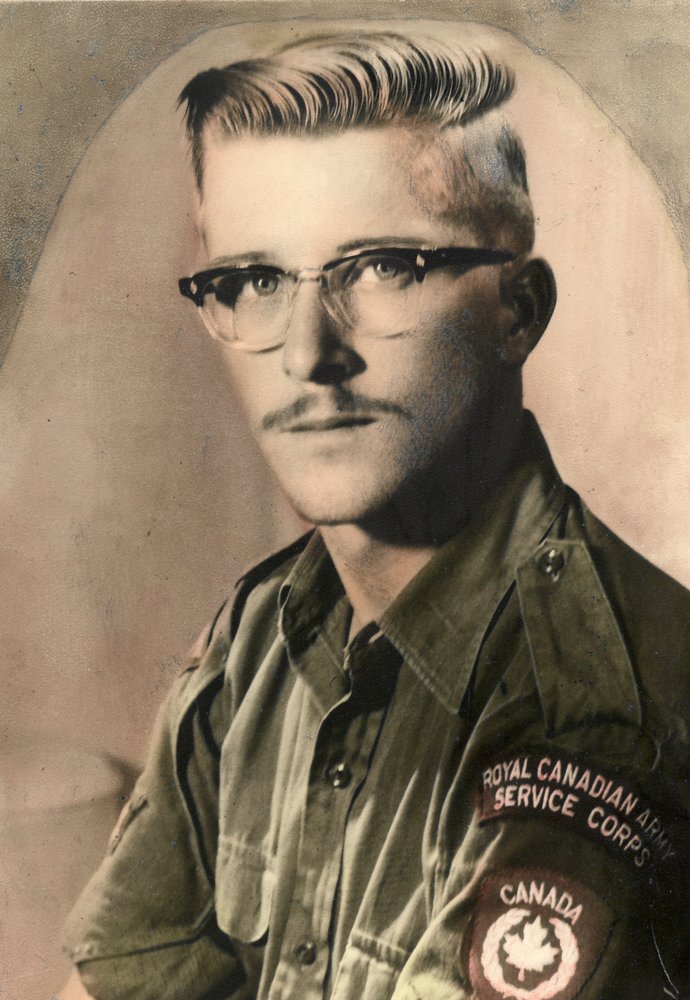 Get Directions
Saturday
21
May

Lloyd was raised in Hanna, AB, until he joined the Canadian Armed Forces in 1961. He served over 20 years receiving numerous honor awards. He received the Canadian Declaration Queens Jubilee Medal. Lloyd did two tours in Cypress as well as three months in Australia. He earned his wings with the Airborne Regiment. Lloyd was head cook for the Canadian Olympic Committee in Calgary, AB for the 1988 Olympics as well as serving members of the Royal Family (Prince Phillip).

Lloyd married Margaret (Peggy) Sloan in August 1964, and they had two children. Joanne was born in November 1964, and Jim was born in March 1967.

Lloyd was stationed in Calgary AB, Prince George B.C., Lahr West Germany, and Baden West Germany. His family travelled Germany and Switzerland while stationed there, enjoying skiing, wine fests, beer fests, camping, and travelling. He then retired in 1982 staying in Baden Germany working as a civilian employee for the Junior Ranks as a manager. After Germany, the family moved to Edmonton and Lloyd worked for a mobile home company on the reserve.

Lloyd was involved with the Car Club Mainstreet Cruisers, having a lifetime membership. He enjoyed travelling around Alberta and Saskatchewan to car shows, and even to Ontario. He drove his 63 Dodge Panel to Ontario. In 1997 they moved home to Delia where he managed the Delia arena for 15 years. Lloyd retired from the arena in 2000 and travelled across Canada to Ontario, Nova Scotia, and the USA to visit family and friends. He was active in the municipal affairs being the Town Mayor of Delia for a number of years.

We will always cherish the great memories and the great stories.

RIP Lloyd you have earned your wings. Love you.

We would like to thank all the nurses and doctors, at the Hanna Hospital, Drumheller Hospital, and the Foothills hospital for all the special care you provided Lloyd during his time of illness.

If desired, donations in memory of Lloyd can be made directly to STARS air ambulance, 1441 Aviation Park NE, Calgary, AB T2E 8M7.Hanna Funeral Services Ltd., entrusted with the care and arrangements; 403-854-5956, www.hannafuneral.ca

Share Your Memory of
Lloyd
Upload Your Memory View All Memories
Be the first to upload a memory!
Share A Memory